The Law: Hit by a Moon Pie Box 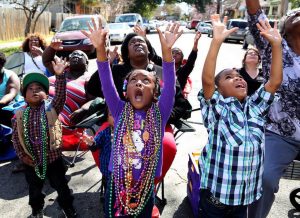 It is Mardi Gras and the Moon Pies are flying. Can you get hurt? Yes. People are throwing things from slow-moving vehicles to very excited crowds.

Here is what I am being asked: Can you throw a Moon Pie BOX from a Mardi Gras float?

The controversy seems to be about the quality of the thrown Moon Pie. On the one hand, the chance of a crumpled pie is high if thrown as an individual pie. Just grabbing it in mid-flight can lead to crumple. To preserve the Moon Pie in its original form, one suggestion is to throw the entire box.

This latter solution comes with some problems. A box of Moon Pies can seriously hurt someone … especially if the head in which the box hits is not expecting an incoming object.

Now the Mobile police has a policy against throwing boxes at people, but officers have been known to look the other way especially during Mardi Gras. What great public service is offered by wrestling a senior citizen from the back of a float during one of our most festive seasons?

The people of Mobile, some of the most creative folk I know, have attempted to solve this problem by simply getting smaller boxes. The police say this is a no-no also.

I have two Mardi Gras suggestions. First, try a crumpled Moon Pie with ice cream. It will make you smile like a Mardi Gras mask. I have also known people to make real pies and other tasty desserts from the mushed up (but still wrapped in cellophane) treats. Second, wear sunglasses. I am more afraid of a bead necklace in the eye than a Moon Pie to the face.

If you are hurt in a traffic accident or suffer a personal injury, you can talk to us at the Law Firm of Eiland and Ritchie for free. We want to help you get back on your feet.

Also, join us on NBC 15 LawCall here in Mobile every Sunday night at 10:30 right after the news. We will take your calls live.