Texting While Walking – It Can be Deadly 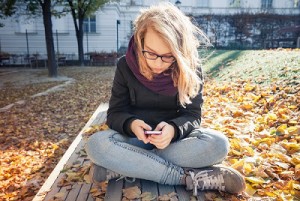 Are you guilty of looking down at your mobile device while walking down the sidewalk or crossing the street? Many of us are, and you don’t have to look far to notice someone else doing the exact thing.

In the past ten years, incidences of distracted-walking accidents have more than doubled. Many of the injuries occur in the home; Just this past Christmas week, I ran right into a living room column while reading a text on my phone. Thankfully, I wasn’t injured, just embarrassed.

But, according to the National Safety Council, roughly 80-percent of the incidents involve a fall. An Ohio State University study found that millennials, aged 21-25, are the most likely to get hurt. A 2014 study found that 10-percent of emergency room visits are from distracted walking.

A San Diego man last week walked off of a cliff while looking at his phone, apparently, trying to take a photo of the sunset. He died.

The problem is getting worse because devices are including more and more features that distract us.  It has gotten so bad that the National Safety Council has included distracted walking as a category in its annual report.

Between the 1970s and early 2000s, pedestrian deaths steadily declined, but since 2009, pedestrian fatalities have increased by 15-percent. The percentage of pedestrians killed while using cell phones has also jumped from 1-percent in 2005 to 3.5-percent in 2010, according to the Ohio State study.

According to safekids.org, teens account for 50-percent of all pedestrian deaths, and injuries among older teens are on the rise. Wearing headphones is also distracting and can cause serious injury.

On Halloween morning of 2012, a 15-year old girl was killed just two blocks from her high school. Christina Ward was wearing headphones and looking down at her phone when a car hit her in the middle of an intersection.

Begin this New Year on a safe note: remind your teens – and yourself – that a text or taking a photo is not worth the life it could cost you.