Swimming at the Beach: Who’s Responsible for Your Safety? 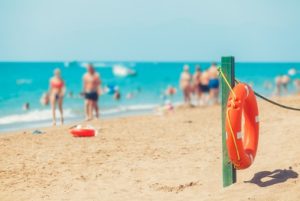 It is vacation time, and therefore, time to hit the beautiful beaches at our country’s shorelines. But when you take your family for fun and sun, do you stop to think who is responsible should a tragic accident occur?

On a beach in Miami, two families would meet tragedy on one fateful day. This beach had no lifeguards; however, it did provide a city-run bathhouse with showers and picnic tables, and a place to rent beach umbrellas and other beach necessities.

On this particular day, the Breaux family with their three daughters and the Poleyeff family, an older couple were enjoying a day out at Miami Beach. Mr. Breaux was building sand castles with his three daughters, and Mrs. Poleyeff had gone out for a swim. At some point, Mr. Breaux heard a woman screaming for help; it was Mrs. Poleyeff.

An experienced swimmer, Breaux dove into the water to try and rescue Mrs. Poleyeff, but there was a strong riptide that day. No signs had been posted about the danger of the currents, and Breaux ended up in trouble himself as the tide pulled the two further and further from the shoreline.

Incredibly, a group of men were able to get to the two and bring them to safety at the shore.  Two of the men were still performing CPR when a lifeguard from eight blocks away arrived on the scene. Sadly, he was too late. Eric Breaux and Eugenie Poleyeff died on the beach.

The Florida Supreme Court made it perfectly clear that the city of Miami was, indeed, responsible for the two deaths. The court added that by supplying the amenities, the public was led to believe that swimming was allowed – signs or no signs.