Save an Eagle, Go to Jail 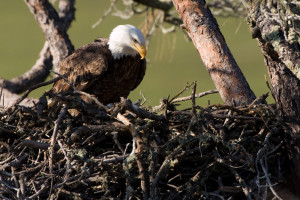 An Illinois photographer may spend time in jail for saving two baby eagles if the La Salle, Illinois State’s Attorney, Brian Towne gets his way.

Nature photographer, Steve Patterson, was in the woods taking pictures when he found two baby eagles and their nest on the ground. Something had knocked the nest and its babies out of the tree.

Steve did what many of us would do – he took them to his home and called the Department of Natural Resources. They told him to leave the eaglets alone. So, he called local wildlife rehabilitation center, which took both of the baby eagles and began to help them grow and flourish enough to be released back into the wild.

One of the eagles has been released, and the other one, Patty – named after her savior, Mr. Patterson is getting close to being ready for release. So what a happy story, right?

Not so fast. Patterson faces four misdemeanor charges for “interfering with wildlife”, and he could face a year in jail. All of this because he did what any caring person would have done.

Meanwhile, Patterson has his State Representative, Bob Pritchard in his corner. Pritchard has introduced a Good Samaritan bill to be presented at the upcoming congressional session.

Pritchard expresses the opinion of many people who love animals and wildlife, “It’s no different than a domesticated animal or even a human; if you have an injury and you can treat and rehabilitate, we ought to try and do that.”

Patterson’s first trial ended in a hung jury; you would think that would have been the end of that. Well it wasn’t, because the state decided to spend more taxpayers’ dollars for a second trial, which is coming up in February.

Steve Patterson says he would do it all over again if it meant saving wildlife. What would you do – especially after what has happened to Steve?