Property Division in a Divorce: Who Gets What? 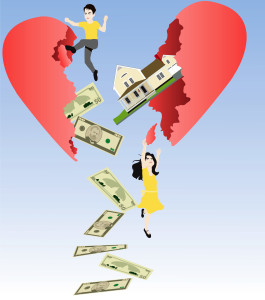 When things go wrong in a marriage and you are headed for divorce court, how do you know who gets what? After all, when you get married, you are enjoined by the property you buy together, the children you have, and many other things that are a part of married life.

Most things are set out by the laws of the state in which you were married and/or reside. There are two types of property where the law is concerned: separate property and marital property.

Marital property is everything that you either earned or acquired during your marriage. You may decide otherwise by entering into a legal agreement such as a pre-marital contract. For instance, any money you earn at work and put into a joint bank account is considered marital property.

Another distinction is whether you live in a Common Law state, or a Community Property state.

In a Common Law state, for instance, if your name is on the deed, registration, or other title papers, it belongs to you. An example of this would be the marital home where both spouses’ names are on the title.

If you live in a Community Property state, the following generally is true:

In Community Property states, separate property is considered to be: inheritances, property owned by either spouse before the marriage, and gifts given to one spouse.