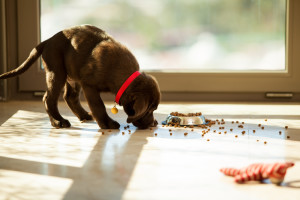 According to claims made by thousands of people, Beneful dog food, made by Purina, has caused horrible illness and even death in some pets. According to complaints, dogs have suffered from seizures, vomiting, kidney failure, dehydration and weight loss after having been on the Beneful diet.

The alleged problems have put the company and its kibble right in the middle of a $5 million lawsuit with more than three-thousand complainants. It is alleged that the dog food contains toxins such as propylene glycol, a product used in anti-freeze, and mycotoxin.

Purina says that there is no basis for the claims and denies any wrong-doing. Dog lovers in the United States and Canada are not buying the company line.

Jean-Francois Menicucci describes how his dog became very ill after eating Beneful; his mastiff, Rex, apparently devoured a bowl full, while his other dog wouldn’t even touch it. Forty minutes after eating the food, Rex went into a seizure that wouldn’t stop; three hours later, Rex was dead.

Menicucci says he complained to authorities who came to his home and took a sample of the food. Purina sent him an apology and $24, as if that was supposed to make things better.  Other dog owners have reported pets that can’t get back up after lying down, and dogs whose back legs are causing their gait to be unsteady.

There are similar reports from North Carolina, Illinois, West Virginia and across the country. Pet owner, Frank Lucido, filed the lawsuit in Northern California. Lucido claims that he fed his three dogs a diet of Beneful, and after a short while, two of them were sick and the other one, dead.

Two previous lawsuits against Nestle Purina regarding Beneful, have been dismissed. But, last May, Purina and Waggin’ Train, LLC agreed to create a $6.5 million fund to compensate pet owners who claimed their pets became ill after eating the Chinese-made jerky treats.

At that time, the FDA said the pet treats were linked to the deaths of more than one-thousand dogs, and almost five-thousand reports of dogs becoming ill after eating the jerky.

If you’re a pet-lover, there is so much to be argued here, but the bottom line, the real question is – will you ever again feed your beloved dog a Purina dog food? Have you had a bad experience with dog food that you feed your pet? Please share with us so that we may keep every pet-lover informed.