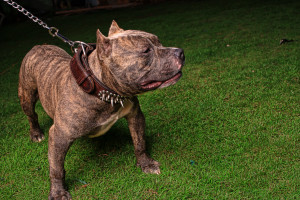 This is a story about a tragedy with a somewhat happy ending. While all the money in the world won’t replace the arm of 8-year old Erin Ingram, it will surely help her live a better life.

In 2010, the 8-year old went outside to play basketball. She lives in Lithonia, Georgia, in Dekalb County. She was attacked by the neighbor’s two pit bulls, and she was almost killed.

Neighborhood children said that they all knew the dogs were dangerous; the owner had been reported for previous violent incidences. On this day, they had apparently gotten out of their fence enclosure.

Erin says the dogs, which are very powerful animals, knocked her down and began biting her. She was screaming for help. The little girl, who testified at trial, says she thought she was going to die.

During the incident, neighbors rushed to try and help Erin, but the dogs could not be contained or otherwise distracted. Finally, police came and shot one of the pit bulls; the less aggressive one they were able to capture, and it was euthanized. The officer testified that if he hadn’t shot the dog, Erin would have been killed.

Erin was rushed to a hospital where doctors had to amputate part of one arm; the other arm is severely scarred. Her ankles and lower legs were also badly injured; she’s already had several surgeries.

So, what about the owner of the two dogs? Twyann Vaughn says the dogs escaped from their kennel while she was at work. She was charged with reckless conduct, owning a vicious dog, and four other counts. She was found guilty on all charges and sentenced to 16-months in jail and 3 years’ probation. She was also ordered to pay restitution to the Ingram family.

Erin faces more surgery as she grows, and it is estimated that her medical bills will exceed $1 million.

Certainly, Erin Ingram is a brave little girl. And, it would seem that the Georgia jury got it right. What do you think?