Does Walmart Have a Case? 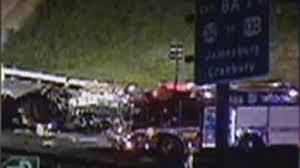 Walmart is hitting back at actor/comedian, Tracy Morgan, and others who sued the company after a fatal car crash in New Jersey in June. The accident happened on the New Jersey Turnpike.

Walmart, Monday, filed a response to the lawsuit blaming Morgan and the other occupants of the limousine for not wearing seatbelts.

Police said a truck driven by Walmart employee, Kevin Roper, rear-ended the limousine. Roper pleaded not guilty in June to charges that include vehicular homicide and assault by auto.

The suit filed by Morgan claims that the company was negligent and careless in the operation of its vehicle. Apparently, Roper had been awake for more than 24 hours at the time of the crash. The suit maintains that Walmart was not in compliance with Federal regulations that were put into place to combat the dangers of driver fatigue.

According to the National Transportation Safety Board, the Walmart truck was travelling 20 miles over the speed limit at the time of the crash. The plaintiffs also claim that Roper had already driven 700 miles before his shift had begun on the day of the accident.

Walmart says that it cannot address the claims about Roper because of the continuing investigation by the NTSB.

An attorney for the plaintiffs, Benedict Morelli, maintains that Walmart’s response is ludicrous, “When tractor-trailer hits your vehicle, at a dead stop, at 65 miles an hour, seatbelts have nothing to do with it.”

Walmart denies any responsibility at all for the accident, stating that there is a possibility that any injuries “may have been caused by third parties over whom Walmart had no control.”

Walmart is asking for a jury trial.

What do you think? Does Walmart have a case?