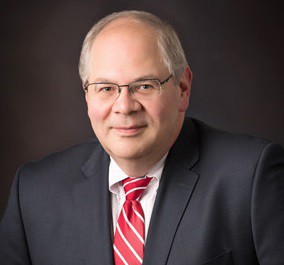 Ron Sykstus is the managing partner of Bond, Botes, Sykstus, Tanner & Ezzell, P.C. in Huntsville, Alabama and Decatur, Alabama. Born and raised in Chicago, Illinois, Ron enrolled at the University of Arizona in Tucson for his college education. While in college, he attended the U.S. Marine Corps’ Officer Candidate School in Quantico, Virginia and, following completion, the U.S. Army offered Ron a full academic ROTC scholarship. Commissioned as a Second Lieutenant in the U.S. Army upon graduation, Mr. Sykstus was placed on educational delay by the U.S. Army in order to attend law school at the Northern Illinois University College of Law in Dekalb, Illinois. He graduated in 1987 with his Juris Doctorate degree. Mr. Sykstus then entered active duty as a Captain with the U.S. Army Judge Advocate General’s Corps.

He served at Fort Bliss, Texas as the lead prosecutor for the 11th ADA Division and the 3rd Armored Calvary Brigade and as a Special Assistant U.S. Attorney in El Paso, Texas. Ron was awarded a Meritorious Service Medal for his service at Fort Bliss.

Mr. Sykstus was subsequently stationed at Fort McClellan, Alabama as the Senior Defense Counsel with the U.S. Army’s Trial Defense Service. There, he supervised an office of attorneys that handled all of the courts-martial and security clearance defense at both Fort McClellan, Alabama and Redstone Arsenal, Alabama. He and his office represented soldiers and officers before administrative boards and courts-martial panels. Upon his honorable discharge from the U.S. Army, Ron was awarded another Meritorious Service Medal for his service throughout Alabama. Ron then joined the Bond and Botes team of lawyers and has been there ever since.

Ron and his wife, Patty, live in Huntsville, Alabama and have three sons. When he is not practicing law, Ron enjoys reading, writing and spending time with his family. He also performs pro bono work for Operation Stand Down – Huntsville, through the Madison County Volunteer Lawyers Program. Throughout the year, he helps homeless veterans submit and prosecute claims for VA disability and pension benefits in the hopes that it helps to alleviate their homeless situation.

For the past 20 years, Mr. Sykstus has practiced exclusively in the following areas of law: Consumer Bankruptcy; Consumer law including Fair Debt Collection Practices Act (FDCPA) cases, Fair Credit Reporting Act (FCRA) cases, Telephone Consumer Protection Act (TCPA) cases and civil lawsuit defense; Security Clearance evocation
Defense; VA Disability claims, and Social Security law. Ron Sykstus is admitted to practice law in Alabama, Illinois, Tennessee, Washington, D.C., U.S. Army Court of Military Review, U.S. Court of Appeals for the Armed Forces, U.S. Tax Court and the U.S. Court of Appeals for Veterans Claims. He is Board Certified in Consumer Bankruptcy Law by the American Board of Certification and has been listed as an Alabama SuperLawyer by Thomson/Reuters publishers and Business Alabama magazine for the past several years. Ron Sykstus has also been awarded a 10.0 superb rating from Avvo and he has an AV Rating from Martindale-Hubbell. Ron Sykstus is the author of “Bankruptcy – We Wrote the Book on It.” and a co-author of “Navigating Legal Issues for Military Veterans.”