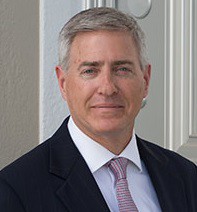 Mr. Graham is a plaintiff’s civil trial lawyer who represents injury victims and their families in automobile collision, wrongful death, and other negligence cases. He has tried civil cases to verdict in Leon County, Wakulla County, Gadsden County, and Taylor County, Florida, respectively.

Mr. Graham grew up in Connecticut in a large family and spend most of his childhood playing sports, particularly baseball and basketball.  He graduated from Boston College in 1982 with a B.A. in political science.  Mr. Graham was commissioned as an Air Force officer shortly thereafter, serving as an intelligence officer, an aircrew member, a special operations staff officer, and as a judge advocate in the active Air Force and Air Force Reserve.  While assigned to United States Central Command, Mr. Graham twice deployed to Kuwait in support of Operations Desert Storm and Southern Watch.

Mr. Graham graduated with honors from the Florida State University College of Law in 1996, where he was a member and officer of the Moot Court team and was selected to the Order of Barristers.  He began his legal career as a Florida Supreme Court law clerk from 1996 until 1999, where he clerked for Justices Harry Lee Anstead, Gerald Kogan, and R. Fred Lewis.

Mr. Graham remains very active and has competed in triathlons, road races, cycling time trials, and swimming competitions, as well as directing the Top Gun Triathlon in Tampa, Florida from 1990 until 1993.