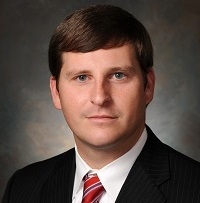 Coe received his Bachelor of Arts degree from the University of Alabama in 2006. While at Alabama, Coe was a member of The Kappa Alpha Order and made the Dean’s List numerous times.

After graduating from the University of Alabama, Coe returned to his hometown of Montgomery, Alabama where he attended Faulkner University, Jones School of Law. During law school, Coe was involved in the advocacy program, American Association for Justice, Phi Alpha Delta and a senior editor of the Faulkner Law Review. In addition, Coe clerked for the Montgomery County District Court and various law firms while in law school, including Prince Glover and Hayes for over a year. Coe received his Juris Doctor degree in 2010. Coe was admitted to the Alabama State Bar in 2010 and the United States District Court, Northern District of Alabama in 2010. Coe is also a member of the Tuscaloosa County Bar Association, the Alabama Association for Justice, and the American Association for Justice.

In addition, Coe provides pro bono legal services to the Good Samaritan Clinic, a Tuscaloosa medical clinic who treats disadvantaged citizens who are without health insurance and also serves on the Saint James High School Advisory Board in Montgomery, Alabama.

He is married to the former Meredith Ann Cramer, an accountant in Tuscaloosa. They are members of First United Methodist Church of Tuscaloosa.

Prince Glover & Hayes Law does not offer any guarantee of case results. The cases mentioned in this site are illustrative of the array of matters handled by the firm involving various areas of personal injury law. In many of the verdicts listed, plaintiffs either settled or obtained a modified award. These illustrations, though based upon cases handled by this office, are representative only and should not be viewed as an assurance of a particular result. Each case must stand on its own facts and circumstances.

These recoveries are not an indication of future results. Every case is different, and regardless of what friends, family, or other individuals may say about what a case is worth, each case must be evaluated on its own facts and circumstances as they apply to the law.