Bringing Law to the Masses 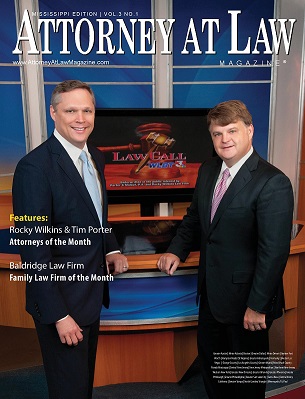 What can a lawyer learn from TV?

Well, not much watching it, but a whole lot from being on it.

Since February 2009, Mississippi personal injury attorneys Rocky Wilkins and Tim Porter have been taking questions from viewers of WLBT-3 “LawCall” in Jackson, Miss. Both attorneys are alums of the University of Mississippi School of Law.

“Law school doesn’t teach you how to speak in sound bites,” says Wilkins. “I have to take 15 minutes in my office and condense it to 15 seconds for TV. That is the new reality in speaking to a jury too. Make your point, be interesting and move on.”

“And you have to think fast on your feet,” adds Porter. “After doing the show live for several years, there isn’t much that will throw me. On TV you just can’t say I’ll look that up and get back to you.”

The 30-minute, legal call-in show airs live every Saturday night at 6:30 p.m. A TV anchor takes calls and directs them to either Wilkins or Porter, as the resident lawyers, or a guest attorney brought in for that specific topic.

Wilkins and Porter are best friends and have a good natured camaraderie. “But we are competitive,” says Porter. “I am quick to point out if he makes what I consider a factual mistake. He is quick to defend it as gospel.”

Though the editorial content is controlled by WLBT-3, an NBC affiliate, the weekly program is produced by a team out of Huntsville, Ala., which oversees the shows in several states.

“Have you ever tried to get attorneys to agree on anything,” said Robert Lane, president of the national “LawCall” group. “It can be a challenge. But with ‘LawCall,’ TV stations and bar associations are happy to have us come in and provide important information to the community. If we succeed, everyone wins.”

“The ‘LawCall’ team did teach us a few techniques that I have seen every successful politician use,” said Wilkins. “There’s a technique called ‘bridging’ where you acknowledge one thing and use that to discuss another.” For example, if a caller is complaining about how long their case is taking, the TV attorney can explain the different elements that go into a case and how they must be completed before a case is resolved.

“Sometimes the law appears to be hard to understand,” Porter says. “My goal is to put legal terms in plain English so that everyone knows their legal rights.”

Here are a few other things that Wilkins and Porter say they have learned from being on TV:

– You can explain contingency fees till you’re blue in the face and people just don’t get it.

– Too much detail confuses everyone.

– Reality TV and social media have taught people to want immediate results. The concept of the “wheels of justice turn slowly” doesn’t work in a Twitter world.

PRO BONO FOR A NEW ERA

Doing a weekly TV show is time consuming. Plus, they are giving up a Saturday evening that is especially stressful during football season. However, both Wilkins and Porter feel like the show is accomplishing an important goal.

“We have a responsibility as lawyers,” says Porter. “The pro bono need in our community is real. Plus, as an industry, the legal profession has not done a great job of educating the public and explaining what we offer and why.”

Wilkins says he is amazed there are not more lawyers putting their time and money into outreach programs like “LawCall.” “Here is the remarkable thing, ‘LawCall’ is the only positive legal show on TV. Plus it is about the only place people can talk to a lawyer for free.”

BEING KNOWN IS GOOD FOR BUSINESS

Both Wilkins and Porter are quick to say that they get benefits out of doing the show. “It is good to be known,” says Wilkins, whose family is reluctant to go shopping with him anymore. “People stop you and ask questions. But they do this because they don’t know where to turn. I am glad to help. This is why I wanted to be a lawyer in the first place.”

“We have been able to meet a lot of lawyers,” adds Porter. “Though both of us have full personal injury firms, it doesn’t hurt that fellow lawyers can learn a little of our expertise in specific matters.”

It also doesn’t hurt to have special guests such as elected officials and judges make appearances on the show. “The attorney general has been on several times updating us about what’s going on in his office,” Porter says, “and it’s always good when the Hinds County sheriff is on the show.”

Rocky Wilkins grew up in Jackson. He attended college and law school at the University of Mississippi. After a brief stint as a defense attorney in 2000, Wilkins started representing injured plaintiffs. “While I enjoyed my time working for insurance companies, in my heart I knew that I wanted to represent people instead of corporations,” he says.

In 2003, Rocky Wilkins Law Firm, PLLC was opened with a focus on auto accidents and fire cases. The firm has achieved great success and Wilkins has tried over 30 jury trials in the last 10 years. Attorney Ben Wilson joined the firm last year due to the growing case load.

Wilkins has obtained several large verdicts for his injured clients. “When you represent an injured person in a trial against a huge corporation, it is like a modern day David versus Goliath,” Wilkins said. The odds usually are against the innocent victim.

“But I always liked the idea of settling disputes with a jury in court rather than with fists. To me, the jury is the great equalizer,” Wilkins adds.

“The most exciting part of my job is meeting a potential client at the worst part of their lives and helping them get things together and get back on with life,” Wilkins says. “They come into your office and are severely injured, or someone has died, they have no idea how to pay for medical bills or school, no idea how to cover their children’s needs, and you help them find solutions.”

Wilkins is no stranger to the world of television law. Outside of his regular legal work, Wilkins has provided local radio and TV commentary on legal issues and had several appearances on CourtTV so it was a natural transition to “LawCall” for Wilkins.

Wilkins is also getting a national reputation for handling death and injury cases related to cell phone tower construction and repair. “Over 100 people have died in the past 10 years and two men died in Copiah County this past May,” Wilkins explains. “‘Frontline’ just did a documentary called ‘Anatomy of a Cell Tower Death.’ This is now the most dangerous job in America and it is an epidemic.” Since the industry has failed to take action, Wilkins plans to use the legal system to make the job safer for cell tower workers.

Porter first became interested in law during his time on the Brookhaven High School mock trial team. Porter placed well in the state competition and loved the process of debating issues against other students.

Porter is a member of the firm of Porter & Malouf. He and his law partner, Patrick Malouf, met in law school. Both graduated in 1993. “We started our firm in August 1999 and have been blessed in our practice.” We have had the privilege of representing thousands of individuals,” says Porter.

Tim Porter has carved out a niche against the manufacturers of dangerous products in cases involving asbestos, silica and victims of the BP Oil Spill. He also handles pharmaceutical cases, defective products, and general personal injury matters.

He has used that expertise during the TV show. “We had a woman call in with mesothelioma,” Porter says. “She was dying and there was little we could do for her at that point in her life, but we were able to talk and give her advice that helped her children in dealing with the aftermath.” Without “LawCall,” she most likely would have never known her legal rights.

Porter also loves going to trial, and his firm handles plenty of them. “Many of the cases get settled, but we still handle about 10 trials a year and cover both small and large cases,” he says.

“When I clerked for Justice Pittman at the Mississippi Supreme Court, I got to see a lot of different cases come through the system,” Porter says. “I found that what I liked most were the cases that dealt with helping people in their time of need.”

GROWING UP WITH THE LAW

Rocky Wilkins’ father was legendary criminal defense attorney, Sam Wilkins. The younger Wilkins would tag along to work with his father. “My Dad used to take me around with him to the courthouse when I was young, so I guess you could say I have being a trial lawyer in my blood,” reflects Wilkins.

Wilkins grew up around lawyers. “My sister, brother-in-law and nephew are attorneys,” he says. His wife, Heather, is also an attorney, handling mostly defense work. “Honestly, I’m glad I never faced her in court,” he jokes, “because I know I’d lose!”

CAN YOU MAKE A CITIZEN’S ARREST?

Porter, too, is married to a lawyer, though his wife Samantha practices mainly in chancery court. “She really enjoys the challenges presented in chancery court and she does an excellent job,” he says.

For most viewers, what they know about the law they learned on TV. “We had someone call in about how to conduct a citizen’s arrest,” Porter says. “While we advised them it wasn’t a good idea. I haven’t heard that term since Goober chased Barney on ‘The Andy Griffith Show,’” Porter adds with a laugh.

From “Perry Mason” to “Matlock” or from “LA Law” to “LawCall,” a lawyer on TV never knows what he will face each week.

Any time issues arise that require more attention than “LawCall” can provide, Porter and Wilkins are both ready to either refer the caller to their own firm or to someone else who can help. Sometimes the cases require an attorney letter, other times they require an actual suit to be filed. Either way, Wilkins and Porter make sure that people have easy access to helpful attorneys.

“We know we’re reaching a large audience,” Porter says. “More and more people come up to us in the grocery store and recognize us.”

“Probably not as much as Rocky would like,” Porter adds with a laugh.

“LawCall” can be seen every Saturday at 6:30 p.m. on WLBT and is viewable throughout all of Central Mississippi.