A Wedding, Fireworks, and a Lawsuit 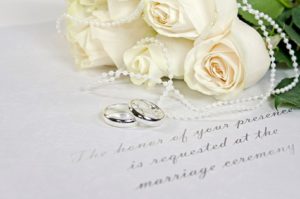 Planning a wedding is supposed to be a joyful, if stressful time in a young couple’s life. Such was not the case for one pair who had been engaged for almost a year.

Bradley Moss and Amy Bzura had planned a huge an expensive wedding. The cost of the whole affair was estimated to be more than $300-thousand, and no expense was spared. Now, at issue is who is supposed to foot the bill, and the $125,000 engagement ring, of which the bride retains possession.

It all began to fall apart and came to a head at the rehearsal dinner after the groom’s parents objected to a toast given to the couple. Now the two families are at war.

Apparently, during the fanciful event, the bride’s brother was scheduled to give a toast and present a video honoring the couple. This is something that is included in many rehearsal dinners where guests are shown a stroll down memory lane of the couple as each was growing up.

And this is where it gets murky. According to a lawsuit filed by the bride’s father, Bradley’s dad became inexplicably angry “and declared that Amy’s brother Adam was not allowed to speak at the dinner.” Bradley’s father, Robert, then allegedly asked, “Do you know what I can do to you?”

It is not clear what, exactly, offended the Mosses, but whatever it was, it caused quit the scene at the upscale Manhattan eatery wherein the mother of the groom got involved and the groom’s brother punched the bride’s brother in the mouth.

During the pandemonium, the bride gave the groom an order – ‘It’s either me, or your mother. You choose.’ He did, and thus the idea of a wedding was definitely ended.

The Bzura’s were forced to file a lawsuit in order for Amy to enter the home that she and Bradley had shared to gather her belongings. She went with a plain-clothed police officer to do so.

Now, at stake is a lawsuit over who is going to pay for the cancelled event and a separate suit filed over the ring, which Amy refuses to return to Bradley.

What do you think about this mess? Do you have your own wedding nightmare story to share with us?